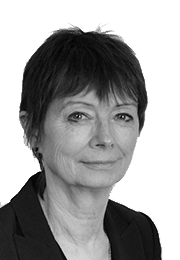 Carolyn has more than 30 years experience of leadership and management in international development, both in the field and at global level. This included significant involvement in global health, humanitarian response and ways of working in fragile states. She is interested in the way the international sector needs to adapt to a rapidly changing world and sees increasing potential for INTRAC to play a greater and pivotal role to support this.

Carolyn was Chief Executive of the international health charity Merlin from 2005 to 2013 where she developed the organisation and led its merger with Save the Children. She was previously Director for Europe, Middle East and Americas at the UK Department for International Development and Director of Programmes at Save the Children. Carolyn has more recently undertaken consultancy or interim work for a number of international organisations including Public Health England (implementation of its global health strategy), the Global eHealth Foundation, Gates Foundation (BMGF), Oxfam and Crown Agents. She is currently undertaking interim CEO roles and advising charities and a new start up.

She has lived and worked in Mozambique / Southern Africa and Nicaragua. Her early career in local government included both strategy and community engagement.

Carolyn was awarded a CBE in 2013 for services to international development.