Home / Resources / Discussion Paper / Briefing Paper 35. Responding to crisis: Understanding the effects of political and economic crisis on civil society in the Republic of Ireland

Briefing Paper 35. Responding to crisis: Understanding the effects of political and economic crisis on civil society in the Republic of Ireland

In September 2008, the Republic of Ireland became the first 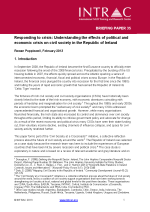 Eurozone country to officially enter recession following the onset of the 2008 financial crisis. The financial crisis plunged the country into recession for the first time since the 1980s and halted the years of rapid economic growth that had earned the Republic of Ireland its ‘Celtic Tiger’ moniker.

The fortunes of Irish civil society and civil society organisations (CSOs) have historically been closely linked to the state of the Irish economy, with economic downturns coinciding with periods of hardship and marginalisation for civil society. During the 1990s and early 2000s the economic boom prompted the “rediscovery of civil society” and many CSOs witnessed unprecedented financial and organisational growth. However, the Irish state also increased its control and dominance over civil society throughout this period, limiting its ability to criticise government policy and advocate for change. As a result of the recent economic and political crisis many CSOs have seen their state funding cut, their voluntary income decline, existing channels of influence collapse, and space for civil society activity restricted further.

This paper forms part of the ‘Civil Society at a Crossroads?’ initiative, a collective reflection process about the future of civil society around the world. The Republic of Ireland was selected as a case study as the team was keen to include the experiences of European countries that have been hit by severe recession and political crisis. The paper argues that Irish CSOs face a wide range of challenges, some precipitated by the economic and political crisis, others which stem from or represent the continuation of trends that emerged during the Celtic Tiger period. It finds that while the primary reaction of organisations has been to economise, typically through cutting salary costs and services, the responses among individual organisations have been very diverse, including professionalisation, diversification, collaboration and closure. Within civil society as a whole, a number of trends are emerging including increased marketisation of civil society, the rise of short-term populist coalitions and campaigns, and the emergence of new social movements seeking to discuss and realise political and economic alternatives.

Briefing Paper 35. Responding to crisis: Understanding the effects of political and economic crisis on civil society in the Republic of Ireland

Civil Society at a Crossroads