With the 2015 deadline for the Millennium Development Goals 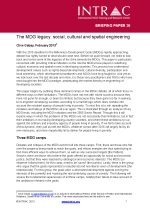 (MDGs) rapidly approaching, debate has turned to what should come next. Before we push forward, we need to revisit some of the legacies of the drive towards the MDGs. This paper provides critical reflection on the role the MDGs have played in redefining cultural, economic and spatial norms in developing countries. This process has undermined development values such as rights-based development, cultural diversity, participation and local ownership, which development practitioners and NGOs have long fought for. Yet as we look back over the last decade, it is these very practitioners and NGOs who have most bought into the MDG paradigm, perpetuating the market-friendly re-engineering of developing societies.

This paper begins by outlining three dominant camps in the MDGs debate, all of which focus on their limitations. The MDGs have not met with mixed success because they have not gone far enough, or been too limited, but because they have gone too far in seeking to re-engineer developing societies according to a market logic which does not take into account the resistant agency of people living in poverty. To miss this is to risk repeating the mistakes and failings of the MDGs. Through an analysis of key MDG texts, the paper explores ways in which the problems of the MDGs are not necessarily their limitations, but are their ambitions in re-making developing-country societies, and where these ambitions run up against the everyday agency of people living in poverty. If we fail to take account of this dynamic, then just as with the MDGs, whatever comes after 2015 will largely fail by its own measures, and more importantly fail to deliver for people living in poverty.

The High Level Panel on the Post-2015 Development Agenda: new promises - can they be delivered?