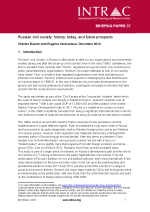 organisations and movements created during and after the break-up of the Soviet Union in the early 1990s. Sometimes, the term is equated more narrowly with “NGOs”; registered non-government, non-commercial or public (obschestvenny) organisations. However, this paper attempts to look at civil society more widely. First, it considers both registered organisations and more spontaneous or informal civic actions. Second, it follows local experts in challenging the idea that Russian civil society began in 1989-91. In this way it features not just recent developments on the ground, but also recent analyses by historians, sociologists and political scientists that take us back into the soviet and pre-soviet periods.

The study was written as part of the ‘Civil Society at a Crossroads?’ initiative, within which the issue of how to analyse civil society in middle-income or “post-aid” countries was an important theme. With a per capita GDP of 12,993 USD and 66th position in the United Nations’ Human Development Index in 2011, Russia is a middle-level country on many indices. In the 1990s it suddenly transited from being a significant international donor with its own distinctive model of state-led development, to being an external aid and advice recipient.

Civil Society at a Crossroads