ONTRAC 11. NGOs and the Private Sector: perceptions, pitfalls and partnerships 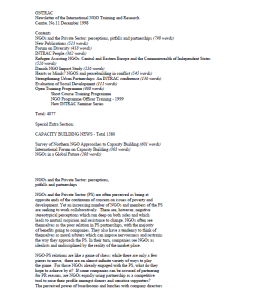 NGOs and the Private Sector (PS) are often perceived as being at opposite ends of the continuum of concern on issues of poverty and development. Yet an increasing number of NGOs and members of the PS are seeking to work collaboratively. There are, however, negative stereotypical perceptions which run deep on both sides and which leads to mutual suspicion and resistance to change. NGOs often see themselves as the poor relation in PS partnerships, with the majority of benefits going to companies. They also have a tendency to think of themselves as moral arbiters which can impose nervousness and restrains the way they approach the PS. In their turn, companies see NGOs as idealists and undisciplined by the reality of the market place.

ONTRAC 11 looks at INTRAC’s research project that examines the changing nature of relationships between NGOs and the PS, and their impact on NGOs’ constituencies. By learning the lessons of past and present engagements, the research explores the potential for the two sectors to work together for global development in the future.

INTRAC, in association with the Centre for Development Research (CDR) Copenhagen, undertook a study in three countries – Bangladesh, Tanzania and Nicaragua – on the impact of the development interventions supported by Danish NGOs and implemented by their country partners. The study was been commissioned by DANIDA and its Terms of Reference and approach were put together after an extensive process of consultation between DANIDA and the Danish NGOs.

ONTRAC 11. NGOs and the Private Sector: perceptions, pitfalls and partnerships