Research on legal frameworks and political space for NGOs

Operating contexts are becoming increasingly difficult and challenging for civil society groups in many countries around the world. Yet even where restrictive legal frameworks are in place, important spaces for engagement exist.

In 2013 and 2014 INTRAC conducted desk-based research with the European Association of Development and Training Institutes (EADI) and the University of Portsmouth, with the purpose of informing the Federal Ministry for Economic Cooperation and Development of Germany. 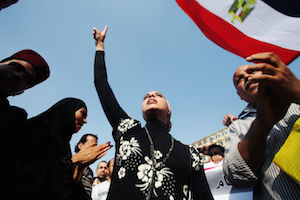 Women’s presence in Tahrir Square during a protest against the Military Trial for civilians.

We found that, overall, operating contexts were becoming more challenging, especially for organisations and individuals working on more sensitive issues such as human rights. However, in some countries, such as Kosovo, global rhetoric about enabling space for civil society was trickling down to the national level, resulting in positive improvements in legislation.

Improvements are far from universal. Since this research was conducted, civil society organisations in many countries are continuing to face an insecure and unpredictable environment. However, our research found that even in the most complex and restrictive environments, important spaces for engagement often exist, which many of the global-level analyses do not pick up.

We drew on our international network of researchers to put together a team with country expertise and robust research skills. The team carried out desk-based reviews of available studies and literature, using a common framework for the country studies. We validated the findings with other experts working on the relevant contexts and within the research team, and came together virtually to draw out key findings across the country studies.

Legal Frameworks and Political Space for Non-Governmental Organisations: An Overview of Six Countries