Praxis Note 59. Leadership, gender and youth: Reviewing the old and experimenting with the new 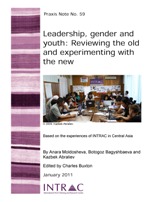 NGOs supporting self-help movements in Kazakhstan, Kyrgyzstan and Tajikistan. The self-help activities successfully included women, particularly those in rural areas. However, we were becoming concerned that these activities were not impacting upon pervading gender power relations. Traditional gender roles were not changing or being challenged.

We were also concerned about the role of young people in communities, particularly after the violence in Kyrgyzstan in April 2010. Young people had been visibly involved in the violence but they had also been active in efforts to restore stability. They had an important role to play in their communities and we wanted to support this through the self-help movements. We developed a leadership aspect in the programme to support self-help movements. We wanted to bring together new ’agents for change’ within self-help groups and NGOs and effectively address gender and age discrimination.

Praxis Note 59. Leadership, gender and youth: Reviewing the old and experimenting with the new

Praxis Note 59. Leadership, gender and youth: Reviewing the old and experimenting with the new - Russian