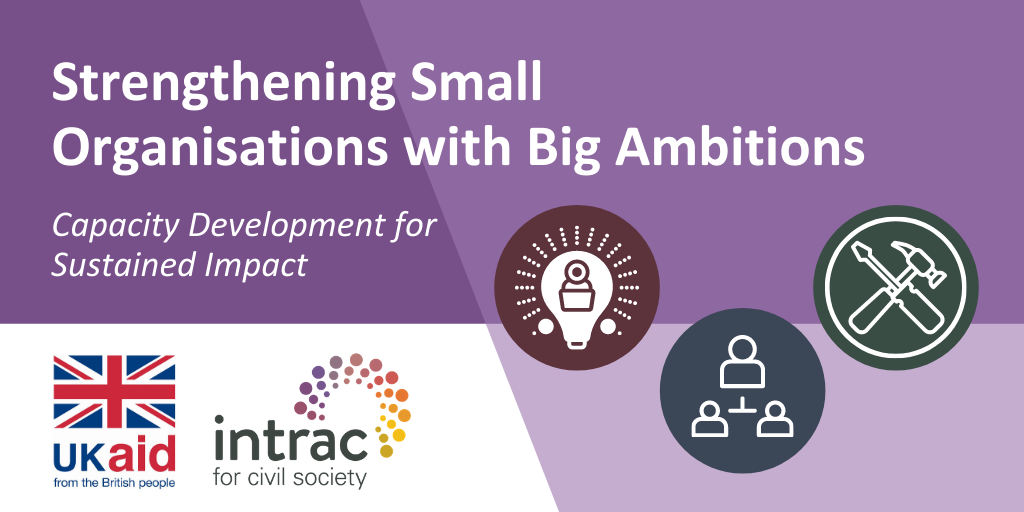 These toolkits and associated tools are aimed at small and very small charities that, regardless of their size, have Big Ambitions. They have all been designed around the needs and areas of interest of the organisations that participated in the Strengthening Small Organisations with Big Ambitions project. Three of the toolkits – Advocacy, MEL and PCS – are directly linked to the training courses on these topics, which were delivered in the earlier stages of the project by the toolkit authors over the course of 2021-2022. The remaining two toolkits – Exiting and transitioning from partnerships and Strategic Planning – were identified as areas of interest of some of the charities during the co-creation phase (Spring 2021), and they were developed into toolkits thanks to INTRAC’s in-house expertise. In March 2022, all of the draft toolkits have been sent for review to the small charities that participated in the project, and they have benefitted from their comments and inputs.

These toolkits are the brainchild of Dr Rachel Hayman, former Director of Research, Learning and Communications at INTRAC, who included them in the grant proposal as a way to offer INTRAC’s expertise to a wider public, and who has kindly volunteered her time and expertise to help with this effort.

A special mention goes to Bill Crooks – a facilitator, organisational and community development expert as well as an illustrator – for gracing the toolkits with his cartoons.  The graphic design was done by Andy Johnson and the project coordination was done by Annalisa Addis.

All of the toolkits and the accompanying tools are released under the Creative Commons Attribution-Non Commercial-ShareAlike 4.0 International License. This type of licence allows for both sharing the resources (i.e. copying and redistributing them in any medium or format) as well as adapting them, as long as it is for non-commercial use, the source is clearly acknowledged, and the new materials are released under the same licence.

September 2022 update: all of the toolkits are now also available in a more accessible, mobile-friendly format developed on GitBook. This version is lighter and more suitable than the PDF for users on low broadband or who can only access the web via mobile phones. It also features image descriptions for visually impaired users and/or in case the images do not load correctly.

The toolkit on advocacy is also available in Portuguese. This translation was produced by ACEP (Associação para a Cooperação entre os Povos, “Association for Cooperation Among Peoples”) and was funded by Eurodad (The European Network on Debt and Development).

Advocacy: a toolkit for small NGOs

Exiting / transitioning from international partnerships: a toolkit for small NGOs

Monitoring, evaluation and learning: a toolkit for small NGOs