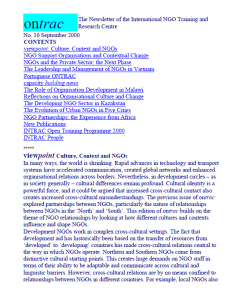 In many ways, the world is shrinking. Rapid advances in technology and transport systems have accelerated communication, created global networks and enhanced organisational relations across borders. Nevertheless, in development circles – as in society generally – cultural differences remain profound. Cultural identity is a powerful force, and it could be argued that increased cross-cultural contact also creates increased cross-cultural misunderstandings.

This edition of ontrac identifies some of the dilemmas and complexities which NGOs face in various contexts. It brings together snapshots of situations from around the world, including three guest contributions, to illustrate the theme. Charles Kazibwe outlines the potential for misunderstandings in North-South NGO partnerships, drawing on experiences from the African context. Zung Le, who has been on a work placement at INTRAC, highlights the particular problems of leadership development facing the young Vietnamese NGO sector. In ‘Capacity Building News’, Chiku Malunga of the NGO Support Organisation CABUNGO writes about the context of Malawian NGOs. In addition, Liz Goold looks at the nature of organisational culture within NGOs and Jon Taylor draws out the ways in which urban NGOs have developed historically in different cities.

ONTRAC 9. Building the internal strength of urban NGO's: the right way round or from the inside out?