ONTRAC 41. This is civil society 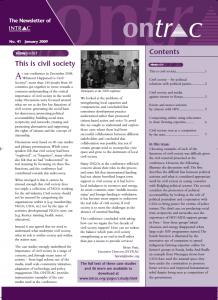 At our conference in December 2008, ‘Whatever Happened to Civil Society?’, more than 140 people from 40 countries got together to move towards a common understanding of the critical importance of civil society in the world today. Discussions were focused around what we see as the five key functions of civil society.

This issue of ONTRAC looks at examples of each of these functions of civil society, which was difficult given the rich material presented at the conference. However, the following illustrate the discussions well. The first describes the difficult line between political activism and what is considered appropriate work by civil society in young countries with fledgling political systems. The second, considers the promotion of political accountability, by looking at the role of political journalism and cooperation with CSOs to bring justice for victims of police torture. The third case, on producing social trust, reciprocity and networks, uses the experience of HIV/AIDS support groups in Peru – how these groups’ initial closeness and energy disappeared when large-scale HIV programmes started. The fourth function is illustrated by the innovative use of computers to spread indigenous farming expertise online for farmer’s groups in Kerala, India. And finally an example from Nicaragua shows how CSOs have used the unusual space they have under the constitution to promote better services and improved humanitarian relief despite being seen as competitors of the government.

ONTRAC 41. This is Civil Society

ONTRAC 41. This is Civil Society. French

ONTRAC 41. This is Civil Society. Russian

ONTRAC 41. This is Civil Society. Spanish