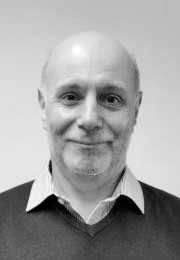 George Gelber is an independent development consultant at BealesGelber Consult. He gained experience in Latin America, first by working as a lecturer in Salvador Allende’s Chile and then as a programmes officer for Christian Aid. He then moved on to Catholic Institute for International Relations, working on development and human rights.

In the 1990s, George set up and managed the Public Policy Unit at Catholic Aid For Overseas Development (CAFOD), switching his attention mainly to Africa in the years of structural adjustment and debt campaigning. As Head of Public Policy, he oversaw campaigns on refugees, landmines, trade, the Common Agricultural Policy, and labour standards in the global electronics and mining industries. Since leaving CAFOD in 2010, he has worked as an independent evaluator and consultant, specialising in social protection, agriculture and food security.

A skilled writer and editor, George has published and edited books on Latin America, as well as numerous papers, columns, reports and blog posts. He has a Bachelor of Arts from the University of Oxford and a Master of Arts from the University of Essex, specialising in Latin American government. He was awarded the Order of the British Empire in 2004 for services to international development.