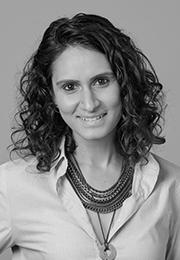 Natasha is the Vice President, Social Impact at the Center for Inclusive Growth – Mastercard’s philanthropic hub. As part of her role, she leads the organization’s new global small business initiative – Strive. The philanthropic program aims to help build the resilience of more than 5.5 million micro and small businesses around the world through an initial contribution of $25M from the Mastercard Impact Fund. Prior to taking on this role, she led the Center’s social impact efforts in the Middle East and Africa region.

Natasha originally joined Mastercard in 2013 to head up communications for the Middle East and North Africa (MENA) where she oversaw internal, external, and digital communications, as well as the company’s philanthropic efforts across the division.

Prior to joining Mastercard, Natasha worked at global communications consultancy Hill + Knowlton Strategies both in Kenya and in the United Arab Emirates. She has also worked at the Royal Bank of Canada in Toronto and has reported for a number of print/broadcast media in Canada and East Africa.

She holds a Bachelor’s of Journalism from Carleton University in Ottawa and a post-graduate Certificate in Corporate Communications from Seneca College in Toronto.