Spain’s Gag Law: Endangering freedom of expression and association in the name of security

A couple of months ago, I watched a video from a civil society movement called “Marea Granate[i]”. They walked the streets of Paris and asked random people if they knew which country could fine a citizen 30,000 euros for peacefully demonstrating in front of their Parliament. Or in which country the word of a police officer has more legal value than the one of a plain citizen.

The answers were the usual: Venezuela, Uganda, North Korea…

I was sadly amused by their faces when they found out that the country was no other than their neighbouring Spain. 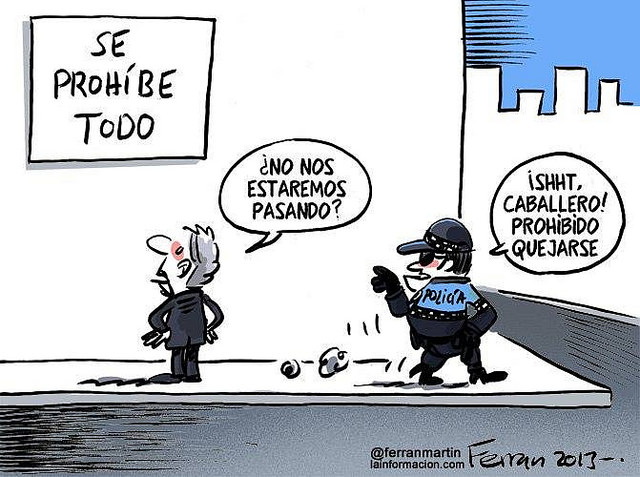 INTRAC has researched and documented the restrictions on civil society space through a number of projects and publications, such as our ONTRAC 52 “Enabling space for civil society action”. Worryingly, restrictions are not only happening in repressive regimes, but also in established multi-party democracies. Spain is a case in point, where on the 11th December 2014 – just one day after Human Rights Day – Congress approved the controversial Citizen Safety Law, commonly known by Spaniards as Ley Mordaza or Gag Law.

A law that according to Judges for Democracy, the Union of Progressive Prosecutors or Amnesty International Spain, aims at controlling and undermining civil society movements.

The 2008 global economic crisis has had an undeniable impact on civil society around the globe. The severe recession and subsequent austerity measures adopted in many countries have left many citizens in middle and high income societies impoverished: salaries are stagnant or even falling, while costs of living and utilities rise. Unemployment rates and evictions grow and the number of suicides rises[ii]. At the same time, research also shows increasing levels of corruption in some of the worst affected countries[iii].

Clearly the previous social contract has been broken, and many citizens – young and old, employed and unemployed, rich and poor – have peacefully fought to be heard, proposing and finding alternative spaces to challenge and face a growing and general unrest and dissent. 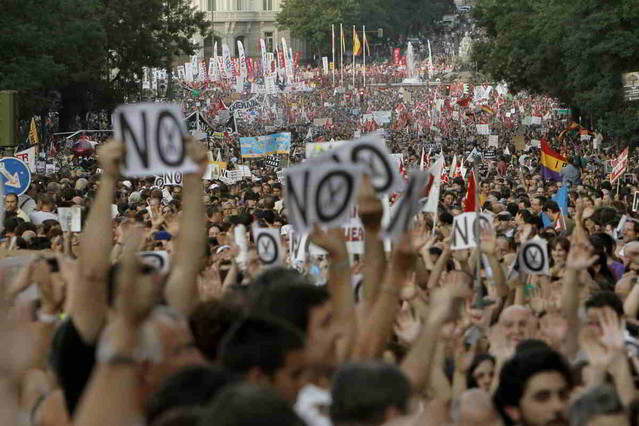 One interesting aspect of the dynamics of the last few years is that restrictive responses to social movements, are no loger an exclusive feature of countries with more typical authoritarian governments. The tensions arising from failures to ensure fair and equitable distribution (and redistribution) of public goods and maintaining an open public debate about the social contract, affect countries and societies of all economic development levels nowadays.

From the Arab Spring to the “Indignados” movement in Spain, different civil society movements and organisations have actively participated and enhanced the political, cultural and economic debates.

Yet in another twist of Ignatieff’s “Lesser Evil” justifications of not-so-democratic measures[iv], the reaction from those in power tend to criminalize them, as if social movements were just another type of fanatical group.

A law that endangers freedom of expression and association and essentially legalizes human rights abuses by giving overwhelming power to police, imposing high fines to impoverished people, summarily expelling migrants or restricting peaceful action, will not defuse tensions but increase them.

Safety and “securitization” of the state can’t serve as a pretext to limit the space for peaceful civil society movements that aim at constructing a better entourage and are only doing what they are supposed to: hold those in power to account.

Cartoon by Ferran Martin @ferranmartin about the Spanish Citizen Safety Law for lainformacion.com, 2013. Notice: Everything is forbidden. Gentleman: Maybe it is a bit too much? Police officer: Shhh, sir! Complaining is forbidden”.

[i] “Marea Granate” (Maroon Wave) is one of the several civil society movements born in Spain after the “Indignados” Movement or Spanish Revolution. Ie.: The Maroon Wave tries to facilitate Spanish expatriates (almost 3 million) to vote. The White Wave (Marea Blanca) defends the Spanish Public Health System; and the Green Wave (Marea Verde), access to quality public education for all.

[ii] Spain currently features an unemployment rate of 24% (50 % for those under 25 years), 700,000 families had  no income in 2014 and there have been around 550,000 evictions since 2007 according to the Platform for People Affected by Mortgages, a Spanish association that takes direct and collective actions to stop evictions, awarded with the Spanish National Prize for Human Rights and the European Citizens’ Prize in 2013.