The Arab Spring, Ukraine crisis and prospects for civil society in Eastern Europe

When the dramatic events in Egypt began in 2011, many of us in the Commonwealth of Independent States region began to worry how they would end. From the experience of perestroika and coloured revolution[1], it was obvious that the forces of democracy could not count on victory. Indeed, any sustained or violent conflict in society might lead to a reduction in political freedoms or economic well-being. 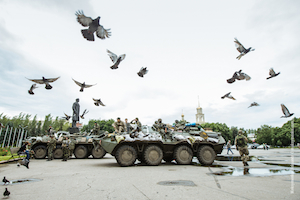 Like in Eastern Europe and the former Soviet Union, the previous leaders in Egypt and Libya had to a large extent been modernisers and their regimes were certainly more secular in orientation than those that followed. The short period in power enjoyed by President Morsi and the Muslim Brotherhood in Egypt, brought to an end by an army coup in summer 2013, demonstrated again the possible contradictions and unexpected turns of a political ‘spring’. The articles in the most recent edition of ONTRAC show the vital work done by civil society organisations trying to clear up the mess left by civil war in Syria and other countries; in only a few places are they able to pursue a reform agenda free from the threat of violence or repression.

This has been the tragic fate of Ukraine this year. Once again, the experience of Maidan, Kiev’s Independence Square, shows how seriously violence affects the outcome of any civil or political struggle. Thus, a campaign to support closer links with Europe turned into a struggle to remove the incumbent President Yankovich; a peaceful protest was taken over by extreme Ukrainian nationalist forces, leading to a reaction from those supporting Russia, the annexation of Crimea by Russia, and now the civil war in Eastern Ukraine. The non-peaceful removal of a regime, however hated and corrupt, always runs the risk of antagonising those who voted for or otherwise supported it. And this happened in Ukraine, with tragic consequences.

Ukrainian civil society organisations that hoped a new president and government would open the way to reform now find themselves working with refugees, opposing unofficial military groupings, and trying to maintain peace in their own communities. Meanwhile, those who have lost relatives in the fighting will be embittered for years, reducing the chances of national unity. The hopes for creating a regime not led by oligarchs or officials associated with previous government grow smaller and smaller.

The experience of Kyrgyzstan’s revolution in 2010 was covered in an edition of ONTRAC devoted to conflict prevention and post-conflict activities. That edition, like the more recent one, identified one positive factor: the mobilisation of new forces in society (volunteers, aid workers, new political actors) as citizens responded to the crisis. As in the Arab world, people in Kyrgyzstan have had to organise themselves just to survive. Civil society organisations have had to find a way to work with government. Many religious groups are working against sectarianism and violence.

In Ukraine as in the Arab world, the involvement of foreign governments and fighters has complicated an already difficult situation. However, international aid has also been vital in responding to the crisis and very often local NGOs have been the quickest and most active helpers in getting food, blankets, and other assistance to those who most need it; supporting self-help; and in beginning to advocate and argue for essential rights in a variety of networks and campaigns.