Home / Blog / Blog / ‘In Search of Common Ground’ in Cameroon: Rigorous evaluation on a tight budget

‘In Search of Common Ground’ in Cameroon: Rigorous evaluation on a tight budget

Teams working both in the UK and in Cameroon have come up with new ways to collect and analyse evaluation data in a peace building project from 2013 to 2018. The UK team had a considerable amount of experience of university and government research in the UK and set out to answer the question: how can a rigorous statistical evaluation be carried out (with qualitative research) with a relatively low budget?

In North West Cameroon there are conflicts over land and water between Mbororo Muslim cattle herders and non-Mbororo subsistence farmers. Crops get trampled and cows slashed. Government interventions have, in the past, tended to encourage legal action rather than amicable conflict settlement and have failed to address the root causes of conflict.

With funding from the Big Lottery Fund, the Mbororo Cultural and Development Association (MBOSCUDA) and Village Aid (part of United Purpose, UP) are working together to reduce conflict through a five-year project ‘In Search of Common Ground’. We have adopted a four level strategy to achieve this aim. Firstly, MBOSCUDA has introduced conflict mediation forums called dialogue platforms to facilitate cooperation between farmers and herders. Secondly, a range of agricultural practices that promote the shared use of natural resources have been introduced, including alliance farming and improved pasture management.

Thirdly, water management has been improved to ensure access to clean and safe water. Fourthly, we are helping build the capacity of MBOSCUDA so that it can become a centre of excellence for promoting rights. Over 14,000 people are directly benefitting from the project.

Little previous research was available on farmer grazer conflicts in Cameroon. The project development period was a year and included three visits to Cameroon by Dr Kemal Shaheen, who was at that time the Chief Executive of Village Aid. About 270 people were involved in focus groups at this stage. The importance of developing success criteria using statistical indicators was a key part of this.

What did we do?

This evaluation was a new approach for Village Aid because baseline surveys had not generally been carried out in the past and the sample sizes of surveys had been generally small. We decided to use 10% of the project budget on evaluation, a far larger amount than any previous Village Aid project (and probably more than most similar projects). It was relatively easy to persuade the donor to use this proportion of the budget on evaluation although we suspect that MBOSCUDA were a little more reticent as it diverted funds from the project interventions.

The research design includes expert interviews, statistical surveys (at years 1, 3 and 5), qualitative research (at year 2) and case studies (at year 4). The mid-term survey of 860 households was conducted in 2016 and compared with a baseline study of similar size. The statistical research was conducted by a team in Cameroon led by an agricultural economist, Valentine Nchinda, managing teams of researchers and interviewers. The UK team was based in Cardiff and Bakewell. Additional qualitative research was carried out by the Pan–African Institute for Development (PAID-WA).

Capacity building with MBOSCUDA was part of the overall project design and it turned out that a certain amount of capacity strengthening was also of importance with the evaluation contractors (PAID-WA), particularly with qualitative work.

What was new and why?

The evaluation was managed in a rather unusual way. Village Aid/UP was involved in detail in all aspects of the survey design and execution and worked collaboratively with the Cameroon based contractors, a process which was very labour intensive at the UK end. The involvement from Bakewell included questionnaire design (getting threatening questions right), clarifying issues on attribution, training interviewers, designing table frameworks, producing analysis at the right level and editing the final report.

The UK evaluation team were all relatively new to African development projects and so they worked hard to adapt their UK knowledge for Cameroon. The absence of a sampling frame and the lack of up to date, relevant government data proved a challenge. The triangulation afforded by the statistical parts of the study and the qualitative parts proved essential in the development of the project and the evaluation.

What was the result? 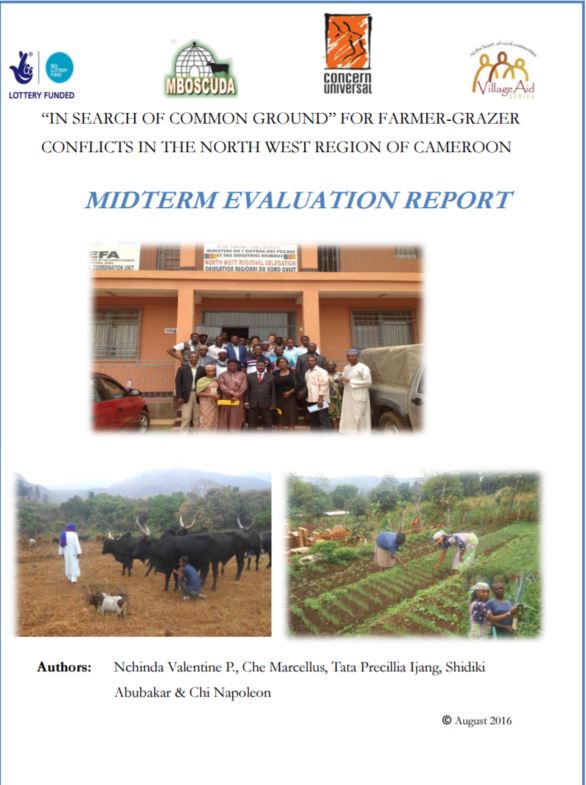 The evaluation has raised interesting issues. Promisingly, it shows a 10% decrease in conflicts in a two-year period and there are still two years of the project to run. The model is that environmental security issues are at the heart of conflict and that tackling these will ease these problems. The results of the mid-term evaluation support this theory but also tell us something more. They highlight the lack of government intervention in the problem and the failure to deal with the issue of ‘benefits’ (bribes) that accrue to government officials within the status quo. These lead ordinary farmers and grazers to feel powerless. The evaluation has highlighted this, a case of research findings leading to new research questions.

The results of the mid-term evaluation were presented at a conference organised by MBOSCUDA and attended by the Ministry Officials, MPs and the Regional Governor in September 2016 and resulted in a serious level of policy debate.

What has been achieved?

We believe we have introduced methods which ensure rigour and have produced results in which our funders can have confidence. Without making exaggerated claims for the project we have shown that conflict can be reduced through these approaches. We have also used the evaluation to improve the project and have been able to combine the work of a UK and Cameroon based team in a positive way. It has been an interesting way of working and a novel experiment.

The evaluation results can be found on the websites of MBOSCUDA www.mboscuda.org and the website of Village Aid www.villageaid.org/resources.

Asong, V., Anchang, J., and Shu, M. (2015) Conflicts over land and pasture in North West Cameroon: Listening to the voices of farmers and grazers. Pan African Institute for Development in West Africa (PAID-WA)